The Basics of Fusion Energy

The Basics of Fusion Energy

If we wanted to power the globe with solar energy, we would need over 50 billion solar panels. Clearly, solar energy isn’t the solution to the world’s clean energy problem but fusion energy might be.

Despite the potential, fusion energy doesn’t produce net positive energy yet, and is always joked about being years away from being ready for use. Over the next couple of months, I plan on writing about the key problems fusion energy is facing so you can understand them without touching a textbook.

If you have any comments or feedback, I’d really appreciate hearing from you! Feel free to DM me on Twitter.

Before we even look at the problems the field is facing, we need to understand the basics.

First, let me tell you a story of how my cat and I did nuclear fusion together (kind of).

Last week, my cat was mad at me because I had forgot to feed him. To make amends, I tried to pet him, but he kept on running away. Eventually, I cornered my kitty and rubbed his belly and at this point, sparks flew. My cat had missed his belly rubbing so much that he purred so loud the neighbours thought I had a motorcycle running in my house. And now, he’s my BFFFL (Best Feline Friend For Life).

This is basically how fusion works (but with less cuteness unfortunately):

Similar to how my kitty didn’t want to be near me and ran away when I approached him (the Coulomb force) but after getting close enough to him (Coulomb Barrier) and rubbing his belly, he’s now inseparable from me (Nuclear Strong Force).

Enough story time, let’s get into the details of how fusion works.

This graph is the Binding Energy Curve and it shows us why hydrogen isotopes are used in fusion.

Binding Energy is the amount of energy that is released when we split apart the protons and neutrons (called the nucleons) in a nuclei. The more binding energy a nuclei has, the more tightly bound its nucleons are.

Starting from the left of the curve we can observe some trends: As the number of nucleons increases, the binding energy of those nuclei increases. Therefore, nuclei with more nucleons require more binding energy than lighter nuclei. This is the case, until we reach nuclei that have the maximum amount of binding energy.

Two of the most common nuclei used in fusion are Deuterium (known as \(H^2\)) and Tritium (known as \(H^3\)). If we look at where \(H^2\) and \(H^3\) are on the curve, we can see that they have low binding energy because of their small atomic mass. Elements with low binding energies are capable of producing immense amounts of energy when fused together. Before I explain why this is the case, we’re going to have to understand what the Coulomb Force and the Nuclear Strong Force are. These two forces determine the shape of the binding energy curve, and thus, play a huge role in fusion.

The Coulomb Law states that like charges repel, and unlike charges attract. Recall that in fusion, we’re trying to get two nuclei that are both positively charged as close as possible so that they can fuse. The Coulomb Force tells us how much repulsive or attractive force is present between the two charged nuclei as they get closer and closer together. Using the equation below, we can calculate the magnitude of the Coulomb Force.

The equation shows that as we bring two positive nuclei together, the repulsive Coulomb force between them increases the closer they are. Now we can start to understand why fusion is difficult, we’re bringing two particles that don’t want to be close to each other, closer and closer together, therefore increasing the repulsive force between the two. At a certain distance between two hydrogen isotopes called the Coulomb Barrier, the nuclei are close enough that an attractive force called the Nuclear Strong Force can fuse the two nuclei together and overcome the Coulomb force.

The Nuclear Strong Force is an attractive force that binds together the nucleons (protons and neutrons) in a nuclei. In fusion, it brings the two positive nuclei closer together once the Coulomb Barrier is passed, allowing the nuclei to fuse. It’s an incredibly strong force, hundreds of times stronger than electromagnetism, and is present at distances smaller than \(10^{-14}\) metres. Protons and neutrons experience this force almost identically.

In fact, the Nuclear Strong Force is one of the four fundamental forces that governs the universe: the electromagnetic force, the gravitational force, the weak force (responsible for decay) and the strong force.

Why the Binding Energy Curve matters

We know that tons of energy can be released when combining two light nuclei, now let’s understand why this is the case by fusing Deuterium and Tritium. 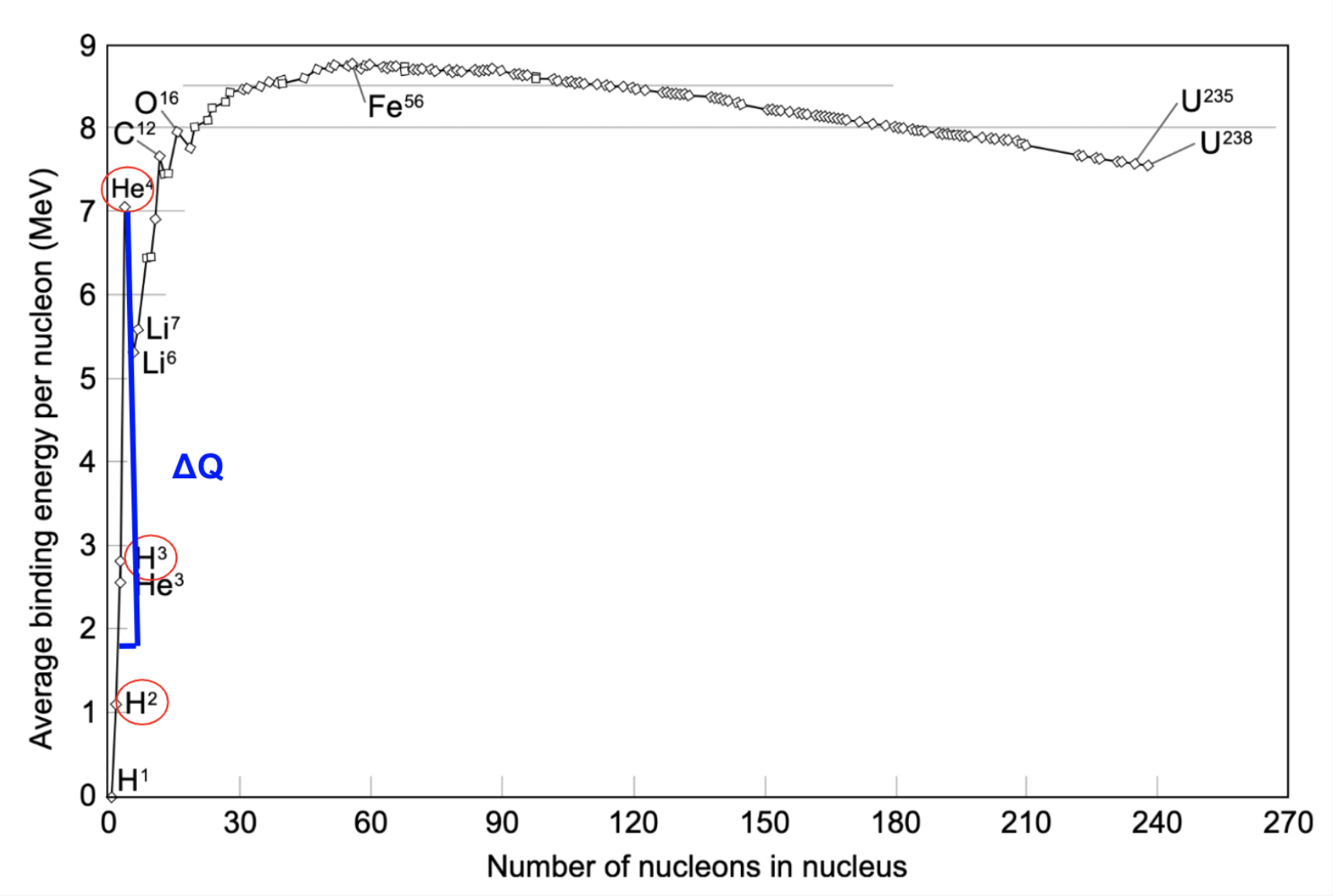 We can split the energy binding curve into two parts from \(Fe^{56}\). 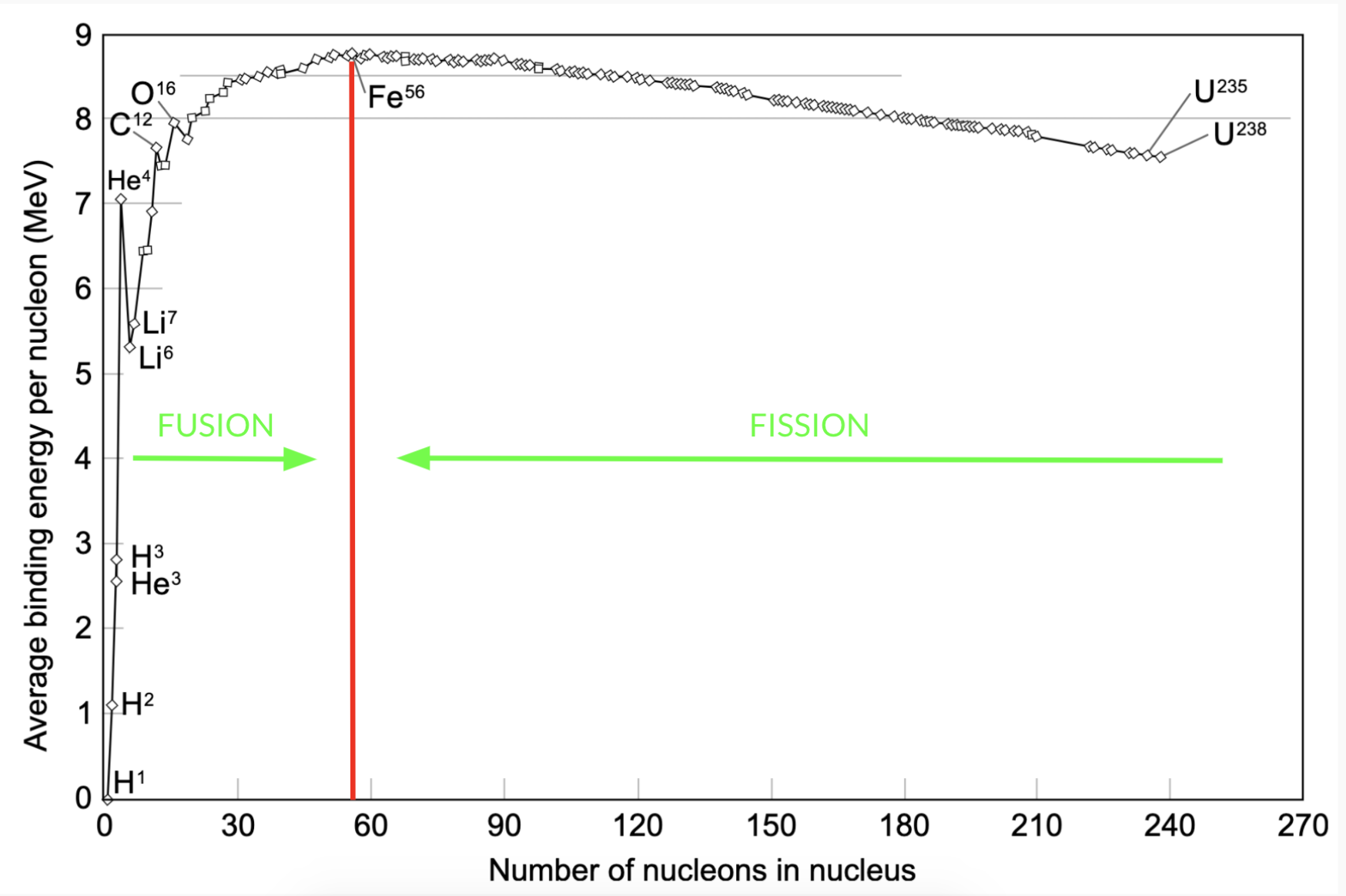 Therefore, a general equation for fusion can be

If you’re interested in learning about the most researched nuclei used in fusion, check out a quick summary I wrote on them here

So far, we know that fusion is initiated by the Nuclear Strong Force that acts at very short range distances (\(10^{-15}\)m). We also know that the Coulomb Force increases as two positively charged nuclei are brought closer and closer together until they reach a distance of \(10^{-15}m\) between each other where the Nuclear Strong Force overtakes the Coulomb Force and fuses the two nuclei.

If the Coulomb Force is preventing us from bringing the two hydrogen isotopes together, how the heck are we going to bring the isotopes \(10^{-15}m\) away from each other? This is called the Coulomb Barrier — it’s the exact point at which the strong force overtakes the Coulomb Force allowing some of the nuclei to fuse.

This graph shows us the Coulomb Barrier at distance \(a\) on the x-axis, let’s break it down.

If the two nuclei can get to a distance \(a\) apart, the Nuclear Strong Force overtakes the Coulomb Force and the two nuclei will fuse. But before we can get to this distance, we need to overcome the increasing Coulomb Force. For the nuclei to reach a distance \(a\) apart, we’ll need to send them at an energy that is equal to the height of the Coulomb Barrier. If the nuclei don’t have enough energy to resist to repulsive Coulomb potential, then the particles will be sent far away from each other again and won’t fuse.

We can calculate the amount of energy required with this formula:

\(R\) represents the radi of the nuclei

The other terms we see are from Coulomb’s Law, check here for a refresher.

This equation once again shows why light nuclei like hydrogen isotopes are the best option for fusion, they experience less repulsive Coulomb Force because they only have 1 proton. In the equation for the Coulomb Barrier Height, we can see that as the number of protons increases in a nuclei the height of the Coulomb Barrier will also increase.

For Deuterium-Tritium fusion, \(V_c\) is typically \(0.4MeV\) which is way above the energy of a typical nuclei colliding within a reactor.

If we want fusion to occur, the nuclei will need to be WAY MORE energetic.

The Maxwell Boltzmann Distribution shows us the distribution of energies of various nuclei in a reactor. The nuclei in red at the end of the curve are the ones that have the most energy and thus are the most likely to pass the Coulomb Barrier and fuse. 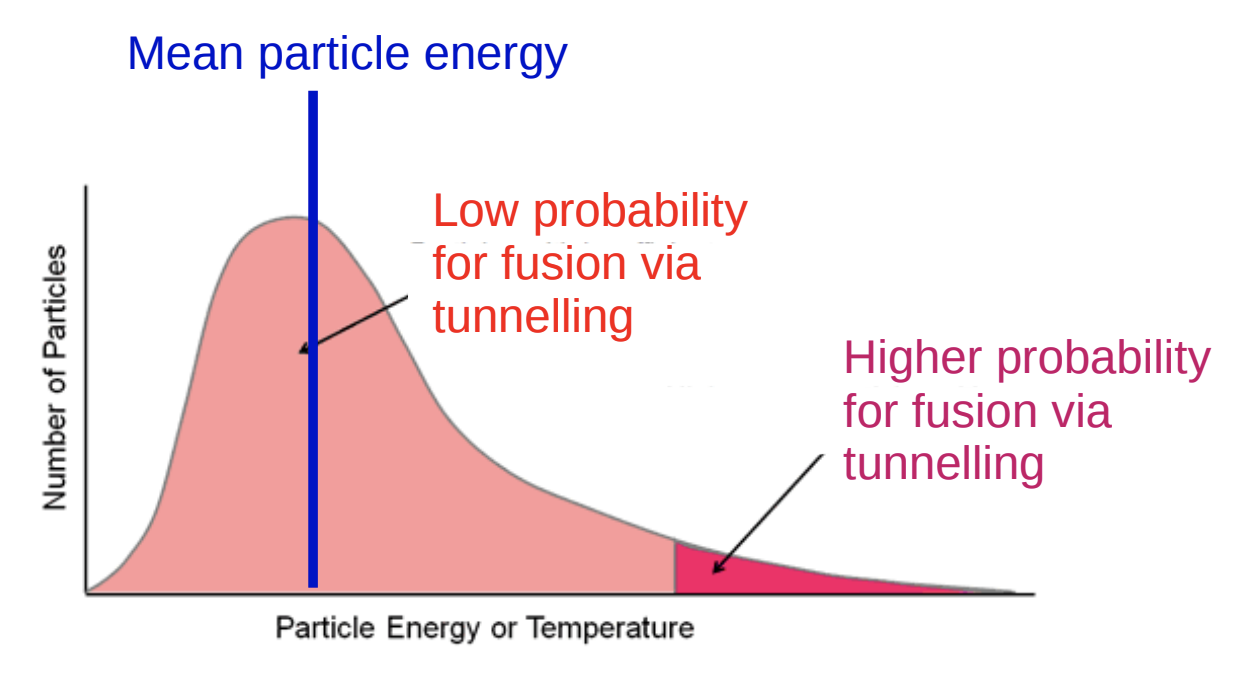 Let’s do a recap just to review any information you might’ve missed:

If you enjoyed reading this, check out [Part 2] (https://www.briannagopaul.com/fusion-rate.html) on the Rate of Fusion.